Number One at OCP
Mr. Jones

In overseeing Delta City, he came across more as a father to the city rather than an owner or dictator like the Old Man. He did however on some occasions show some ignorance about the condition of things, such as with Old Detroit. During a ride-along Diana Powers suggested he take with RoboCop, the Chairman seemed quite happy with the way things were. However, after being trapped with a family that lived in fear of a local gang whilst needing a transplant for their child, the Chairman became more sympathetic to Old Detroit's citizens.

The Chairman had the ability to alter RoboCop's programming or even terminate him from a computer console built into his desk. The only downside to this was that Pudface Morgan was once able to activate it with the use of Eve.

The Chairman was interviewed on Mediabreak concerning MetroNet, the supercomputer that OCP planned to utilize in automating Delta City's utilities and transportation infrastructure.[1]

Later, the Chairman attended a presentation of NeuroBrain by Chip Chayken and Dr. Cray Z. Mallardo. He ultimately approved of their plan and looked forward to the jealousy of other companies.[1]

At the Shareware Expo, the Chairman unveiled MetroNet to fellow businesspeople, displaying the automation capabilities it had.[1]

He later met with Mallardo, thanking him for the demonstration of MetroNet, but learned that Mallardo was responsible for the deaths of fellow business executives in an elevator on the premises. Mallardo further revealed that he was in full control of MetroNet, thus in control of Delta City. The Chairman refused to make this control legally recognized.[1]

With Mallardo in full control of OCP, the Chairman discussed with his board their options for removing Mallardo, who then destroyed appliances in the room, prompting the board to flee, with the Chairman attempting to warn them about the elevators.[1]

Officer Lisa Madigan soon came to the Chairman, reporting that RoboCop had uncovered evidence against Dr. Mallardo and requested to have the cyborg put back online. The Chairman agreed to this, immediately ordering Charlie Lippencott to reactivate the cyborg. However, Chayken managed to sabotage RoboCop's memory banks, causing him to suffer amnesia.[1]

Soon, the holographic Diana Powers, who controlled NeuroBrain, came to repair RoboCop. On his way to save Powers, RoboCop told the Chairman that Mallardo was wanted for murder.[1]

Following the arrests of Mallardo and Chayken, the Chairman told Sergeant Stanley Parks that OCP in no way condoned their actions.[1]

The Chairman later led a meeting celebrating the success of the company's diet product No Gain. During this meeting, Kevin Frosh asked for further testing of the product, but the Chairman failed to acknowledge his apprehensions. Later, Sergeant Parks presented OCP with evidence that No Gain was highly-addictive and responsible for a rise in violent crime. This prompted the Chairman to order No Gain's recall.[2]

The Chairman felt it necessary to subject Old Detroit to power rationing, prompting Diana Powers to appear to him, voicing disapproval for the Chairman's decision. Pointing out that he failed to serve the people of Old Detroit, Diana set up the Chairman to go for a ride-along with RoboCop.[3]

His first remark upon seeing the community was that the insurance companies must have been exploiting it, to which RoboCop stated that OCP owned the companies in question. Responding to an alert from a destroyed ATM, the Chairman was dismayed to find that it had belonged to his own company.[3]

Upon hearing gunfire, RoboCop took the Chairman to the scene, finding the Stompers descending upon a vehicle containing Joe and Ami Avery alongside their ailing son, Josh. As RoboCop confronted the gang, the Chairman fled from RoboCop's TurboCruiser as a plow truck ran over the cruiser and RoboCop. The Chairman and Joe came to the significantly damaged RoboCop's aid, with the Chairman claiming to be a journalist named Mr. Jones.[3]

Upon arrival at the Averys' hideout, the Chairman took note of a Turbo-Generator developed by Joe in response to the intermittent power outages. A friend to the Averys, Norton, immediately recognized the Chairman and tried to attack him, exposing his identity as Joe stopped the attack.[3]

Once Joe suggested traveling to Metro South to inform them of RoboCop's location, the Chairman offered to go in his stead, feeling that Joe belonged with his family. The Chairman did not make it very far, however, before being attacked by a Stomper. Norton came to his rescue and the Chairman returned to the hideout. When Joe expressed doubts about his ability to fully repair the cyborg, the Chairman was first to encourage him, confident in his ability. When Joe noted that RoboCop would need to be shut down for full restoration, the Chairman became concerned that RoboCop would lose his identity of Murphy. Murphy responded to these concerns with "To be human is to risk."[3]

RoboCop's repairs were completed in the morning and fought off the Stompers, with the Chairman backing him up alongside Norton and Joe. Once the gang was defeated by RoboCop and police backup, the Chairman brushed off Aubrey Fox's suggestion that the media hail him as a hero, instead checking in on the Averys, assuring them that Josh would receive the lung transplant he needed. He further expressed interest in Joe's Turbo-Generator. He then checked in with RoboCop, confirming that he still was Murphy.[3]

The Chairman went out of his way to ensure that Josh would receive his transplant, a promise he made clear to the MediaBreak audience. After Josh's transplant was a success, the Chairman assured he would advocate for the same treatment for anyone else in Josh's position.[4]

After the Chairman and Vice President of Omni Militech Eugene Omar showed Omnium to a group of military officers, they held a meeting with Detective Madigan. The purpose of this meeting was to detail top-secret items stolen from an Omni Militech warehouse by Hard Company. They showed her a video demonstration of the plasma cannon, a device developed to destroy the electrical systems of enemy technology and personnel.[5]

When Hard Company took over Public Works, threatening to steal the Omnium unless details of project Big Sword were released, the Chairman backed up Omar's refusal to give in. The Chairman assured the MediaBreak audience that the situation would be dealt with. Soon, the Chairman demanded Omar's resignation.[5] 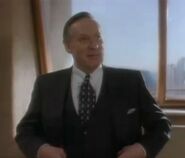