Revived as NeuroBrain, Dr. Mallardo and Chip Chayken, RoboCop and the Chairman were the only people who know of her existence within the NeuroBrain computer. She often appeared to the Chairman helping him see the evil things being done by members of his company. She was also very friendly with RoboCop referring to him as Alex.

On the way to Dr. Cray Z. Mallardo's presentation to NeuroBrain to the OCP board, Powers asked how it would replicate the human spirit, likening Mallardo's concept to something that a dictator would use.[1]

During Dr. Mallardo's presentation of NeuroBrain to the OCP Board, Diana tripped up and grabbed onto Dr. Mallardo. For this reason Chip fired her before being scolded by the Chairman.[1]

Powers interrupted a conversation between Chayken and Mallardo to inform the former of an update in a plagiarism case. The discussion the two men were engaged in concerned the failing brains in the NeuroBrain unit, in which they decided that they needed a young brain that had not been stressed by life. They both quickly agreed that Powers' brain would be the perfect candidate.[1]

Chip Chayken and Dr. Cray Mallardo killed her and used her brain to power NeuroBrain, super computer to run MetroNet and handled all aspects of Delta City life. During the creation of NeuroBrain Chip, Chayken kept seeing faces in the data stream. Dr. Mallardo convinced him that it was just guilt and stress tricking him. Once NeuroBrain was online both men witness a confused and distraught version of Diana Powers in holographic form. After preventing Mallardo from killing OCP executives in an elevator. she learned from Mallardo that she had full control of Delta City, a power she was unwilling to have.[1]

As Mallardo and Chayken wished to destroy her, she later locked them out of the room containing NeuroBrain. Mallardo and Chayken had an engineer arrive to cut through the doors. Diana transferred herself to RoboCop and managed to restore his memories that had been sabotaged by Chayken. She asked him to come save her.[1]

Once inside, Mallardo was hit by an electrical field running through the floor but due to an insulated suit, he was unharmed. He inserted a disc and uploaded a program to destroy the hologram so that just the brain remained. Diana was close to being erased but Dr. Mallardo's efforts were thwarted by RoboCop. As she survived, she personally oversaw the running of Delta City.[1]

She appeared to RoboCop at a church where he recalled Murphy's memories of being there. Learning that he was troubled by Reverend Robert Taker's claim that he was a soulless abomination, Powers assured him that behind his wholesome public persona, Taker was actually quite corrupt.[2]

While being pursued for the murder of Taker, Diana answered Murphy's call for help and patched him through to Charlie Lippencott's lab. He got into contact with Gadget, who helped him make temporary repairs by showing him Charlie's prototype of RoboCop's circuitry. She asked Murphy why he refused to present her as his alibi for the murder, to which he answered that people would not understand what she was. Powers then searched for a prototype of Murphy's gun, finding it in Dr. Roger Yung's possession.[2]

After OCP forced power rationing upon Old Detroit, Diana appeared to the Chairman, criticizing this decision and pointing out his indifference to the citizens of Old Detroit. She arranged for the Chairman to go for a ride-along with RoboCop.[3]

While investigating a robbery at an Omni Militech warehouse, Murphy asked Diana to retrieve info on Hard Company, an elite military squad supposedly killed during the Amazon War. She learned that the squad had been assigned to a top secret biochemical project called Big Sword just prior to their apparent deaths and was led by General Eugene Omar. She also learned from Murphy that he had been childhood friends with Frank Uno, a member of Hard Company.[4]

Soon, Hard Company took over OCP Public Works, where Diana was housed. Led by Colonel Albert Brox, they demanded public disclosure of Big Sword, threatening to destroy MetroNet if this demand was not met. The group came close to extracting the Omnium that helped run NeuroBrain, but were stopped just in time by Murphy and Uno.[4]

After her death, Diana Powers appears only as a special effect. Andrea Roth does all of her acting in front of a blue screen. Her character's image is later composited with the film of other characters that she interacts with. “I never really know what my final scenes will look like, and it is a challenge to create my own reality around the scripts,” Andrea explains. "Diana is fulfilled in life as the NeuroBrain, because she is now empowered to contribute to a better way of life for thousands-upon-thousands of people." 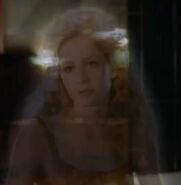