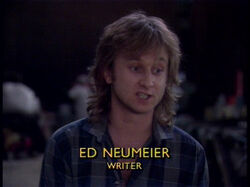 Edward Neumeier (often credited as just Ed Neumeier) (born 1957) is a screenwriter best known for his work on the science fiction movies RoboCop and Starship Troopers. He wrote the latter's sequel, and most recently wrote and directed Starship Troopers 3: Marauder.

Neumeier wrote his first outlines and film treatments for his first movie, RoboCop, as well as "spec" scripts. He declined an offer of a vice-presidency at Universal Pictures, to develop the screenplay for RoboCop, with Michael Miner.

The rights to the screenplay were bought up by the Orion Pictures company, and was granted a budget of just under $15 million. Paul Verhoeven was assigned to make the movie.

Neumeier also co-produced RoboCop, which was released in movie theaters in 1987 in North America and some other locations. This movie was a success, and it drew just over 50 million dollars' worth of ticket sales in the United States, alone. The success of RoboCop also motivated the production of two sequels, RoboCop 2 and RoboCop 3, and also two TV series, one live-action and one animated. Most of the creators of RoboCop had left before the production of these sequels.

A decade after the first RoboCop movie was produced, Neumeier rejoined Paul Verhoeven to work on Starship Troopers, which was adapted from the novel with the same name by Robert A. Heinlein in 1959. With violence and satire thrown into a story of efforts by the human race to insure its survival (in ways similar to RoboCop at times, Starship Troopers seemed to have been more successful in Europe, Asia, etc., than in North America where it drew gross ticket sales of about $54 million at theaters, although Artforum magazine selected this film as one of the "10 most artistic film achievements of 1997". Neumeier also appeared in this film in the brief role of a man convicted of murder and sentenced to immediate execution.

Retrieved from "https://robocop.fandom.com/wiki/Edward_Neumeier?oldid=14114"
Community content is available under CC-BY-SA unless otherwise noted.