Mortal Kombat 11 is a 2019 fighting video game. The 22nd installment in the Mortal Kombat series, it was developed by NetherRealm Studios and published by Warner Bros. Interactive Entertainment. It was released on April 23, 2019, for the PlayStation 4, Xbox One, Nintendo Switch, and Microsoft Windows.

RoboCop (voiced by Peter Weller) is featured as a guest fighter in the Aftermath downloadable content, released on May 26, 2020. In his ending, he reveals that he travels to MK's universe when he finds Kano dealing arms to Old Detroit's street gangs and follows him through a portal.

Notably, the game also features a Terminator unit as a fighter. RoboCop and Terminators previously appeared together in the RoboCop Versus The Terminator comics and video game, as well as the comic series, Terminator/RoboCop: Kill Human. These crossovers are alluded to during a battle intro between RoboCop and the Terminator, in which Murphy insists that they have met before, though the Terminator has no recollection of such.

RoboCop as he appears in the game 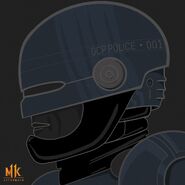 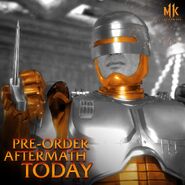