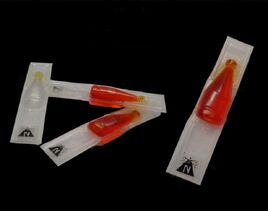 "There is a Nuke for every mood."
―Cain, referring to his various versions of Nuke[src]

Nuke was a highly-addictive and most pleasurable narcotic that was made by the drug lord and leader of the Nuke Cult, Cain.

Unlike narcotics processed from agricultural sources or plant extract, Nuke was a designer drug, thus manufacture could be accomplished in near any location using widely available chemicals.

There were four known varieties of Nuke:

The original and most widespread variant was Red Ramrod.

Following Cain's death, his brain was inserted into the cyborg, RoboCop 2 and it, like Cain before, was addicted to the substance.

The tiny "container" that held the drug Nuke was actually a saline re-moisturizer for contact lens wearers in the late 1980s and early 1990s. The solution was dyed red and, in some shots, had a small needle sticking out after someone removes the covering to administer the drug.

Retrieved from "https://robocop.fandom.com/wiki/Nuke?oldid=16643"
Community content is available under CC-BY-SA unless otherwise noted.