The RC-2000, better known as RoboCop, was a cyborg created from critically injured police officer Alex Murphy by OmniCorp. 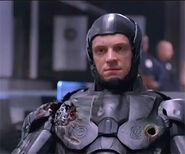