This article deals with the cyborg. For the model cop and world class husband, see Alex Murphy.

The OCP Crime Prevention Unit 001 is afforded the fastest reflexes made possible by modern technology, a memory assisted by an on-board computer, and programmed with a lifetime experience in on-the-street law enforcement.

Fundamental to his operational limits are RoboCop's Prime Directives, a set of rules, unbreakable and unbendable, that RoboCop is firmware bound to uphold.

They are as follows:

RoboCop's primary weapon, the Auto-9 remains stored in a mechanical holster which deploys from RoboCop's right leg. It is also modified so it will not fire unless RoboCop is the one using it.

Though unnamed in the films, the script referenced the Auto-9 by name and it subsequently made it into promotional materials including action figures.

In the first movie it was introduced during the firing range scene. In this scene, many of the officers are distracted by a very loud gun unlike anything they have ever heard. They all lean forward to see a large black hand firing the Auto 9. As they gather around, RoboCop shows off his skills by completely annihilating the cardboard cutout he was shooting at. He then raises his gun looking very pleased with himself. He then twirls the gun and puts it into the holster giving us our first look at his fancy internal holster.

The TV series referenced the Auto-9 by name and added that the main version of the weapon was modified so that no one but RoboCop could actually fire it. In one episode Dr. Roger Yung, who created the Auto-9, uses the prototype to frame RoboCop for murder, showing that this model could be fired by anybody. Also in episode 11 The Human Factor, Webber is trying to purchase illegal weapons from a dealer. The dealer list loads of weapons and among them are "Auto-9 Avengers". It is unknown if these weapons resemble RoboCop's gun.

The base weapon is a Beretta 93R.

In RoboCop: The Series, grenades called Ordinances were equipped in his left thigh holster that, when placed on an object, beeps. Once beeping, a shot from the Auto-9 will trigger it to ignite an explosion. The power of these explosives range from Level 1 to Level 10, with a Level 3 grenade having enough explosive force to destroy a solid metal security door.

RoboCop has an internal zoom capability for better aim as well as tracking. RoboCop also has different vision modes. His systems use a grid which is crucial to RoboCop's targeting as well as bullet trajectory (allowing him to make ricochet shots), though apparently the targeting reticle of RoboCop is internal to him, as seen in the first movie. He also has a recorder which can detect voice fluctuations and stress as well as play back audio/visual. This recording capability enables RoboCop to document any situation he encounters with perfect recall and unbiased neutrality, with his memory being deemed through legal agreement as admissible evidence in a court of law. In the television series, he is capable of lie detection by means of a polygraph.

RoboCop's body, while incorporating portions of Alex Murphy's living tissue, is largely electronic and mechanical. This interior structure is protected by an armored shell composed of "titanium laminated with kevlar" making RoboCop incredibly resilient against both bombs and bullets, as well as extreme impacts such as being hit by cars and falling off skyscrapers. The body armor can sustain multiple of high-caliber rounds before damage begins to appear on the armor itself. It is also highly resistant to heat. His visor is made of the same material and a black strip of bulletproof anti-fog glass which protects the cranium apparatus and eyes. The visor also has an undercloth of Kevlar which protects the neck and covers up any wires etc. It should also be noted that the visor conceals most of Alex Murphy's face inside it. The visor is attached with screws. When the visor is removed only the front of Murphy's face, from the top of the neck up, is exposed; the back of his head is entirely mechanical

His right hand also contains a spike (referred to by fans as a "dataspike" and by production as the "terminal strip") which is used to retrieve or display data from any computer bank with a corresponding port. RoboCop is extremely strong, able to lift the front of the average car over his head with one arm or resist the crushing effort of a car crusher, as seen in the TV series (episodes 5 and 21, respectively). He was designed to be able "to penetrate virtually any building," and breaks locks with ease.

In RoboCop: Creating a Legend, a bonus feature on the RoboCop: 20th Anniversary DVD, it is speculated that Murphy's face was removed from his corpse and implanted on the cyborg's head to give RoboCop a sense of identity. This psychological disruption RoboCop may have experienced is explained from the basis that a person whose memory has been erased would still possess the memory of being human and would suffer a psychotic breakdown if that person saw the reflection of a robotic image instead of their original image of humanity.

Despite all of RoboCop's technological advances, he is still limited to mechanical maintenance, which means (just like any machine), he needs servicing and tune ups from time to time. On top of that, his organic systems need to be monitored as well therefore the scientist working on him (Dr. Marie Lazarus) would have to monitor both systems during his rest periods.

Another one of RoboCop's faults is that he is also programmable, meaning that in the wrong hands he can be programmed to be incompetent, corrupted or a dangerous threat to society.

RoboCop occasionally has flashbacks of his previous life as Alex J. Murphy, which causes him to have "dreams" when he is in his recharging state. This sometimes causes him to sleepwalk or wake up in shock.

Another big disadvantage is the inability to move very fast or run. It means that any object dangerous to him as moving at high speed, he will definitely be knocked down, and would take a long time to recover up.

Behind the scenes[edit | edit source]

In the early stages of casting for RoboCop: The Series, Skyvision was in negotiation with Peter Weller, the original RoboCop, to reprise his role. However this did not come to fruition and Richard Eden was cast. Eden had the job of portraying a different side of RoboCop than had ever been seen before. He was a very convincing RoboCop until his helmet was removed. Some reviewers claimed that his face appeared too soft (feminine features). RoboCop had always had a somewhat menacing look about him without his helmet on. Eden did not look menacing at all in the makeup. In fact he always looked very sad. He also lacked the strong jaw line that Peter Weller and Robert Burke both had.

With production of RoboCop The Series based in Canada, new suits were created for actor Richard Eden. Molds were taken from suits used on RoboCop 3, resulting in RoboSuits that didn't quite fit the actor, since the thighs and collar had been extended for Robert John Burke.

The prosthetic makeup was mostly kept intact, with a few features simplified, but the face was resculpted. The large budget of The Series meant that the effects team could experiment, and Murphy's facial prosthetics were cast in silicone instead of foam latex. Unfortunately, silicone painting techniques were underdeveloped at the time, resulting in a pale and lifeless appearance unhelped by a soft and non-aggressive sculpture.

Several new gags were created for The Series, including a Terminal Strip that could be attached to the actor's glove, enabling him to insert or remove it from computer interfaces without camera trickery.

Although a left leg-holster was incorporated into the show, there was only ever one built. The holster gag built for the sequels was reused or rebuilt for The Series, with the shots simply mirrored in post-production for the left leg. 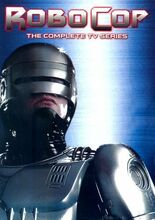 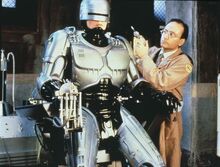 Add a photo to this gallery
Retrieved from "https://robocop.fandom.com/wiki/RoboCop/Television_Series?oldid=18132"
Community content is available under CC-BY-SA unless otherwise noted.