This article is about the live-action series. For the animated series, see RoboCop: The Animated Series. 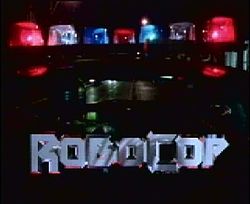 RoboCop: The Series is a 1994 television series based on the film of the same name. It stars Richard Eden as RoboCop. The TV Series takes place at least five years after the first RoboCop movie, where Delta City has been greenlit for development amongst Old Detroit, and follows the dystopian world of RoboCop through its titular hero.

While RoboCop was initially an American property, Orion Pictures received a $500,000 cash infusion for TV licensing rights to Canada's Skyvision Entertainment. This allowed access to co-production treaties and possible partnerships with other countries. The series was filmed in Toronto and Mississauga, Canada and originally planned for a January 1994 debut, several months after the unsuccessful release of RoboCop 3. Skyvision was also in negotiation with Peter Weller, the original RoboCop, but this did not come to fruition. Twenty-two episodes were made, but the series was not renewed for a second season. Expense played a significant part in this; according to Skyvision VP Kevin Gillis, episodes would be produced at $1.2 million to $1.5 million each.

The pilot episode runs two hours. It was adapted from a discarded RoboCop 2 script, Corporate Wars, by the writers of the original RoboCop, Edward Neumeier and Michael Miner.

While made to also appeal to children and young teens, with the graphic violence that was the hallmark of RoboCop and RoboCop 2 absent for obvious reasons of television broadcasting standards, The Series nevertheless maintains its originating material's penchant for adult black humor and social commentary by more subtle means, and through the original script for the sequel, showcases a greater deal of humanity on RoboCop and his career through the turbulent metropolis of Delta City and Old Detroit. MediaBreak still exists, covering both the larger than life news in Delta City and the globe, while a rather twisted superhero parody significant of the 90s era of western animation by the name of Commander Cash has his own related animated segments, who is an OCP mascot made to peddle and promote various excursions of the company relevant to the episode. Many of the episodes were also explicitly critical of conservative and libertarian policies, i.e. the privatization of health care and welfare, the rise of televangelism and prosperity gospel superchurches as corporate powers, covering up scientific evidence and research in the pursuit of profit, etc. and the ironic handling of many of the negative aspects of modern urban life through Near Future Detroit and Delta City was now maginfied and given a greater view on a broader; more frequent scale, helping to widen the scope on seeing the quality of life its citizens would go through.

Rather than killing criminals, RoboCop now has several non-lethal alternatives, which ensure that certain villains can be recurring; nevertheless, some one time villains come to meet rather grisly ends by being more rephrehensible than most of RoboCop's rogue gallery, the former being rather the results of the dystopian world they live in than its instigators in this case.

Villains on the series include Boppo the Clown, Dr. Cray Z. Mallardo , OCP executive Chip Chayken, William Ray "Pudface" Morgan , Vlad "Don't call me Stitch" Molotov and even Commander Cash himself (although, in one episode, it is revealed that Commander Cash was actually a misunderstood hero - a former OCP employee who was the real creator of OCP's Commander Cash toy line whose idea was stolen by a co-worker and subsequently terminated from the company due to the said coworker).

The series gave writers more of an opportunity to develop the central characters and to extend the human interest aspect through the introduction of Gadget; the station mascot and the adopted, insightful daughter of station Sergeant Parks. Gadget, along with the presence of Jimmy Murphy did much to shift the focus from the adult to the youth target audience. The writers also introduced an element of virtual romance and deus ex machina in the persona of Diana, formerly a secretary to crooked Vice-President Chip Chaykin, who becomes transmogrified through her death into the 'face' and 'body' of Metronet, OCP's city-running super-computer. The OCP Chairman and his corporation are also treated as merely naïve and ignorant, in contrast to their malicious and immoral behavior from the second movie onward.

This section is incomplete.

While it does not explicitly disregard the events of RoboCop 2 or RoboCop 3, the series deliberately only acknowledges events from the first film, with some of these events appearing in the opening credits, but re-staged with the show's cast. Thus, several of the series' characters essentially serve as replacements for film characters:

Despite these cast/character changes, the series' first episode shows footage of Clarence Boddicker and his gang killing Murphy, taken directly from the film. The series occasionally implies that the above replacements are the same characters, but with different names:

Although the characters were likely intended to be the same, this interpretation creates continuity issues with the original film:

Finally, although the series ignores RoboCop 2 and RoboCop 3, if Anne Lewis and Lisa Madigan are one and the same, it cannot share continuity with RoboCop 3 because Lewis dies in the film. It cannot be set between any of the films either, as Delta City is never realized in the film trilogy, while the series shows that it has been constructed.