In 2028, multinational conglomerate OmniCorp is at the center of robot technology. Overseas, their drones have been used by the military for years but the Dreyfus Act, a publicly-supported act preventing drones from being allowed to bear firearms, prevents the drones from being used locally. OmniCorp CEO Raymond Sellars (Michael Keaton) has his marketing team, in conjunction with scientist Dr. Dennett Norton (Gary Oldman), create a new law enforcement product by combining human and machine in the hopes of changing public opinion and raising OmniCorp's profits.

Policeman Alex Murphy (Joel Kinnaman) is critically injured by a car bomb planted by crooked cops outside his house under the payroll of local crime boss Antoine Vallon (Patrick Garrow). Norton picks Murphy for the RoboCop program, and after getting consent from Murphy's wife, Clara (Abbie Cornish), has him outfitted with the RoboCop body and software, which gives him enhanced strength along with instant computing information in his brain. Alex at first rejects his current condition, but is convinced by Norton to be strong for his wife and son. Rick Mattox (Jackie Earle Haley), OmniCorp's military tactician, is skeptical of Alex's abilities and points out he will never be as efficient as a drone. In order to make Alex perform better, Norton tampers with Alex's brain, making him believe that his tactical decisions are his own when he is actually executing programs.

While preparing for a public press conference to unveil RoboCop, Alex is emotionally overwhelmed and has a seizure while downloading the police database information into his brain. Pressed for time, Norton has Alex's brain chemistry altered, lowering his dopamine levels until he no longer displays any emotions. Under control, Alex attends the press conference, where he ignores his waiting wife and son, and efficiently apprehends a criminal in the crowd. RoboCop is a public relations success, and afterward Alex is successful in drastically reducing the crime rate in Detroit. Public opinion on the Dreyfus Act begins to turn.

Clara, who has been prevented by OmniCorp from seeing Alex, manages to confront her husband as he is leaving the station, telling him about his son David's nightmares. Alex leaves, but then overrides his programming and detours from his current case to go to his house. He reviews the CCTV footage of his accident and realizes that David saw his body and was traumatized by it. Alex then pursues Vallon for revenge, tracking him down to a warehouse where Alex then kills everyone. Alex then returns to the station to apprehend the two cops who sold him out; they tell him that the Chief of Police is in on it. Alex shoots one cop non-fatally and stuns the other, and is about to arrest Chief of Police Karen Dean (Marianne Jean-Baptiste) when Mattox, who has been given full access to the RoboCop program, remotely shuts him down.

Sellars decides to spin this turn of events to his advantage, via television presenter Pat Novak (Samuel L. Jackson), who thanks RoboCop for revealing the fallibility of the police, and points out that drones are incorruptible. A repeal of the Dreyfus Act goes underway, with votes overwhelmingly in support of the repeal. Sellars tells Norton that RoboCop is no longer relevant, and sends Mattox to destroy him. Norton reaches Alex in the lab first and has him brought back to consciousness, telling him everything. Alex, feeling betrayed, goes after Sellars.

Sellars has the OmniCorp building shut down and armed with drones. Alex manages to gain entry with the help of his former partner, Jack Lewis (Michael K. Williams) and other police officers. Alex encounters Mattox and is almost at defeat, but Mattox is shot by Lewis, who is shot non-fatally. Alex reaches the roof, where Sellars is waiting for a helicopter and has Clara and David as hostages. Alex's programming prevents him from arresting Sellars, but he manages to overcome it just long enough to shoot Sellars, killing him.

In the closing scenes, OmniCorp's parent company, OCP, decides to review the drone and RoboCop program. The President vetoes the repeal of the Dreyfus Act based on the testimony of Norton, who confesses everything they'd done in the RoboCop program. Alex's body is rebuilt in Norton's laboratory, and then he waits for Clara and David, who are coming to visit him.

The idea of a RoboCop remake or "re-imagining" has been in development hell for many years.

Sony Pictures (Screen Gems division) first announced that it was working on a new RoboCop 2014 film in late 2005; no further details were given. In November 2006, Bloody Disgusting reported that the RoboCop remake had been halted.

The film has a budget of $100 million (US) according to IMDB.com and is written by Nick Schenk (Gran Torino) and Joshua Zetumer.

Joel Kinnaman, star of the series The Killing, landed the lead role in the next remake of Robocop.

The first official image released related to the project was the new design for ED-209, via the viral marketing campaign site OmniCorp.com.

RoboCop was met with overall mixed reception and currently holds a "Rotten" 49% on Rotten Tomatoes. 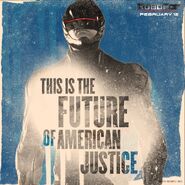 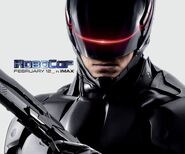 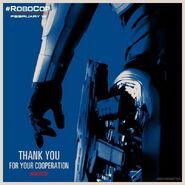 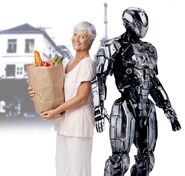 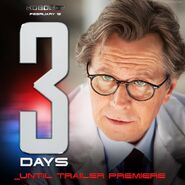 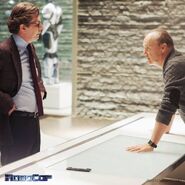 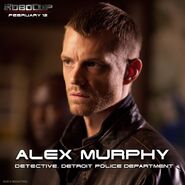 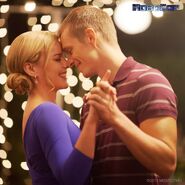 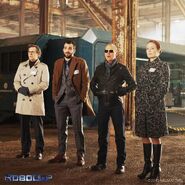 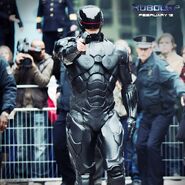 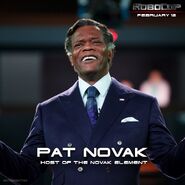